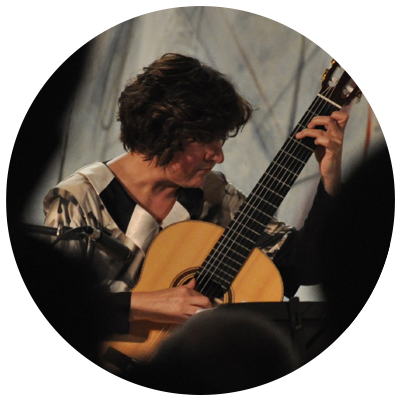 VESNA PETKOVIĆ, MA (1959), studied the Guitar at the Music Academy in Zagreb, in the class of prof. S. Prek, I. Korunić and D. Petrinjak, in whose class she graduated in 1983. She obtained her MA degree at the Faculty of Music Arts in Belgrade, in 2006, in the class of prof. V. Ogrizović. She has upgraded her skills at the masterclasses of renowned national and international pedagogues and artists in the country and abroad: L. Vitosinski, L. Zea, J. Kodina, R. Andi etc. Since 1984, she has performed as a soloist and with different chamber ensembles. She was teaching a guitar in Novi Sad: from 1983 – 1988 and also at Music College in Niš: from 1988 – 2000.  As a soloist, she has realized lasting recordings for Radio Television Belgrade, Novi Sad and Niš. As the Aikido master, she has done researches in using  the Ai-Ki principle in playing instruments and has written her MA degree thesis  The Basic principles of Aikido in the correlation with the principles of guitar playing. She has held several masterclass workshops within the guitar festival Guitar Art-Belgrade, Naissus Guitar-Niš, in Požarevac and Negotin. She has been present at International Festivals in Bulgaria and Slovenia as a jury member. Since 2000, she has performed more intensively in Serbia, Greece, Spain, Bulgaria and the Republic of Srpska, as a soloist and in the Duo Crescendo – guitar-flute, together with a flutist Bratislav Zlatković. She presented herself at the Guitar Art Festival in Belgrade, in 2009 at the Concert of Serbian guitarists. She was the founder of the International guitar festivals – in Leskovac, in 2000, with the Music School Stanislav Binički,  as well as in Niš, in 2008  with the Association of the guitarists- Naissus Guitar.She is the artistic director of Naissus Guitar Festival in Niš. Since 2000, she has taught at the Faculty of Arts, as the Associate Professor at the subjects Guitar and Methodology of Guitar.