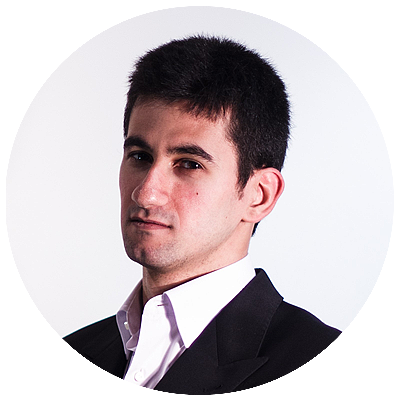 Pianist and conductor Santiago Costa was born in Vigo (Galicia, Spain) in May 1991, and moved with his family to the Netherlands at the age of 7 where he started to play the piano under the guidance of Hilda de Rochemont. He was awarded with the prestigious ‘Han Lammers’ grant by the Dutch Commissary of the Queen for his exceptional merits in September 2007, and obtained complementary grants from the ‘Stichting Eigen Muziekinstrument’ (SEM) and the ‘Prins Bernhard Cultuurfonds’ among others. In July 2014 he won the ‘ArtEZ Muziekprijs’ prize as most outstanding student of the classical department at the ArtEZ Academy of the Arts, where he studied with Frank van de Laar. Praised by critics and important musical personalities for his profound musicality, he performed in many important concert halls in Netherlands as well as in many other venues Spain, Portugal, France, Belgium, Lithuania, Italy, Switzerland and Germany, and in festivals like MusicAlp Festival, Rimini Music Festival, and Schleswig-Holstein Music Festival. He received advice from maestros like Matti Raekallio, Jacques Rouvier, Anatol Ugorski, Dimitri Bashkirov and Stephen Kovacevich among many others. Besides the piano solo repertoire, of which he encompasses a broad spectrum of stylistic periods (from Bach and Haydn till Schoenberg and Rautavaara as well as contemporary composers) he is also a highly passionate chamber musician and vocal accompanist. As a conductor, he led orchestras like the Lithuanian State Symphony Orchestra (LVSO) and the Berlin Sinfonietta, as well as several chamber orchestras in Netherlands, conducting works by Mozart, Beethoven, Schubert, Tchaikovsky, Elgar & Schoenberg. He studied orchestral conducting with Peter Gaasterland and Jan Stulen, having received advice from maestros like Colin Metters and Lior Shambadal. In may 2018 he founded the International Holland Piano Series, bringing world-renowned musicians to perform in the city of Hengelo in Netherlands. Subsequently the Music Education Program was set up as part of the International Holland Piano Series, mainly focusing on helping young music talents in their musical development.