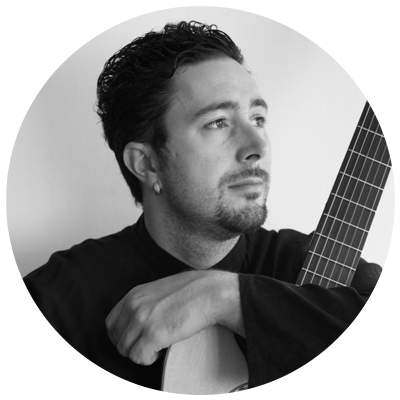 Djani Šehu (1980) Sarajevo, Bosnia and Herzegovina. After high school, he studied guitar with professor Rafael Andia at the Ecole Normale de Musique Alfred Cortot in Paris, France, he continued his education at the Universität für Musik und darstellende Kunst in Vienna, Austria. He studied with professors Konrad Ragossnig and Alexander Swete and graduated in 2006 at the concert department for guitar. He earned his master’s degree in 2010 studying under professor A. Swete. Throughout his education, attended with world-class professors and artists. As a soloist and chamber musician, he has performed throughout Bosnia and Herzegovina, Croatia, Serbia, Austria, France, Sweden, Italy, Germany, Japan, Denmark and Spain. He has performed as a soloist with the Sarajevo Philharmonic Orchestra (Bosnia and Herzegovina), the Tonart Simfonietta (Austria), and the Dubrovnik string quartet (Croatia). Since 2006 he is teaching at the Music Academy of University of Sarajevo. His students have gained worldwide attention with their successes at international competitions and concerts throughout Bosnia and Herzegovina and abroad. In addition to his active concert schedule, he is a guest of many festivals internationally as a master class clinician and serving as a member of the juries. He is a founder and director of the Sarajevo International Guitar Festival and International “SIGF Summer School”.